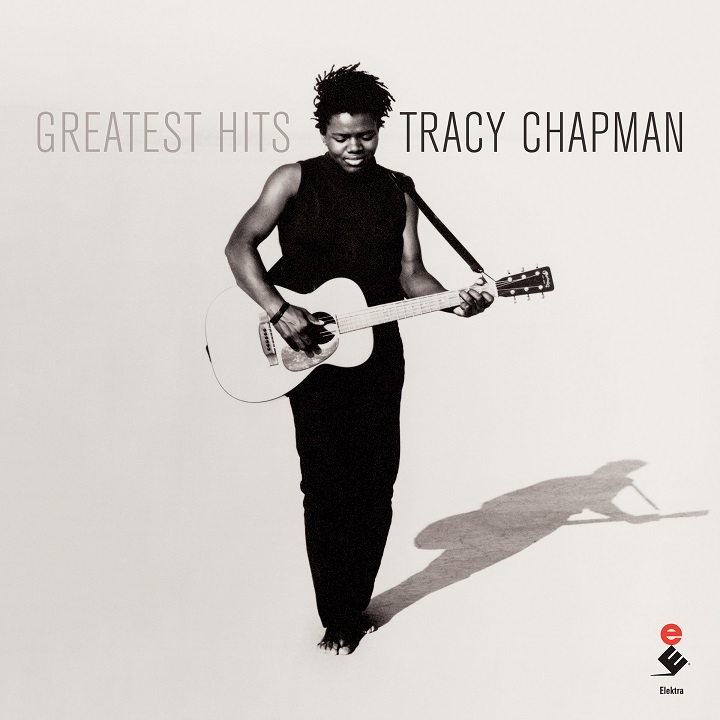 18 songs, all remastered, chosen by Tracy Chapman herself, compiling 25 years of music: the tracks are taken from her 8 studio albums (from 1988 to 2008) to her live interpretation of “Stand By Me” at the David Letterman show in April 2015.

It’s been 27 years since Tracy Chapman released her “Debut Album” and it seems it was just yesterday. She’ll be celebrating a nearly three-decade career with a greatest-hits compilation through Elektra / Rhino Records.

The album charts the history of Tracy Chapman’s most popular songs, all released as a single (but “Save Us All”) and the vibrant interpretation of “Stand By Me” she gave at the David Letterman show in April 2015. She received for it tremendous reviews from the press and her fans.

The album will be available on Elektra / Rhino Records on both CD and digital formats. The photo cover chosen for the “Greatest Hits” is from Herb Ritts: it was taken in 1989 for the album “Crossroads” and used on the cover of the single “Crossroads”.

Order the “Greatest Hits” on iTunes or Amazon

Here is the complete tracklisting of Tracy Chapman’s Greatest Hits:

ALBUM COMPILES OVER 25 YEARS OF MUSIC FOR THE FIRST TIME

Tracy Chapman releases her long-awaited Greatest Hits album on November 20 through Elektra/Rhino Records. This new collection brings together, for the first time, classic tracks from Chapman’s celebrated career that now spans four decades and includes eight best-selling studio albums. Compiled by Chapman herself, the featured songs have also been newly remastered. Since her eponymous debut in 1988, Chapman has captivated audiences around the globe with her pure voice, evocative songs and intense spirit, and her ear for authenticity infuses these 18 tracks with a visceral and emotional resonance.

Tracy Chapman has created a body of work that has been as consistently compelling as it is honest and uncompromising, eloquently telling stories with perennial appeal that are at once personal and universal. Impervious to trends, she has commendably stayed her musical course, earning the approbation of fans, critics and peers, beginning in 1988 with the release of Tracy Chapman. The multi-platinum debut album earned three Grammy Awards and featured the classic singles ‘Fast Car’, ‘Talkin’ Bout A Revolution’, and ‘Baby Can I Hold You’. It went on to become one of the most successful debuts of all time, selling more than 20 million copies worldwide. To this day, it still makes regular appearances on album charts around the world, and is one of the most successful albums by a female artist in chart history. Chapman’s musical journey has continued with 1989’s Crossroads (RIAA platinum, internationally multi-platinum), 1992’s Matters Of The Heart (RIAA gold), 1995’s multi-platinum New Beginning (which featured the Grammy-winning single ‘Give Me One Reason’), 2000’s Telling Stories (RIAA gold, internationally platinum), 2002’s Let It Rain (internationally platinum), 2005’s Where You Live, and her eighth studio album, 2008’s Our Bright Future. Along the way, in addition to her four Grammys, Chapman has earned an American Music Award, two Brits, and a Billboard Music Award.

Raised in Cleveland, Ohio, Chapman was awarded an academic scholarship to the prestigious Wooster School in Danbury, Connecticut, and later attended Tufts University, where she received a Bachelor of Arts in Anthropology (in 2004 she received an honorary doctorate of fine arts from her alma mater). It was while she was there that she began singing in coffee houses, night clubs and street performing around Harvard Square in Cambridge, Massachusetts.

Since her breakthrough performance at Nelson Mandela’s 70th birthday concert in London in 1988, Tracy Chapman has appeared frequently in support of social and humanitarian causes, including Amnesty International’s Human Rights Now! Tour, the annual Bridge School benefit concerts, the Nelson Mandela Free South Africa Concert, Farm Aid, Tibetan Freedom Festival, Vote for Change, the Driving Votes tour, San Francisco AIDS Foundation, and many others. Chapman made her theatre debut composing the music for a new production of Athol Fugard’s classic 1961 play Blood Knot, which opened at San Francisco’s A.C.T. in 2008, and was directed by Charles Randolph-Wright. In 2012, Chapman performed at the 35th annual Kennedy Center Honors, honouring Buddy Guy. In 2014, she sat on the domestic documentary jury at the Sundance Film Festival. In 2015, she was invited by David Letterman to sing ‘Stand By Me’ during his final season hosting The Late Show, commanding a stage entirely on her own for a performance – now included on this album – that demonstrated her enduring appeal and relevance.

Order the “Greatest Hits” on iTunes or Amazon ; Amazon.fr