You are at:Home»Concerts»2004 – Western Swing: An Evening with Tracy Chapman
By Aurélie M. on 1 October 2004 Concerts 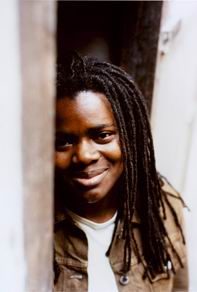 The tour will kick off September 24th in Portland, OR (See below for full list of dates and venues).

The tour, called “Western Swing: An Evening with Tracy Chapman,” will feature Tracy and her band in a very intimate setting. These incredibly special shows will help build on the momentum generated by the Driving Votes Caravan, a cross-country trip that registered thousands of voters, as DrivingVotes.org now transitions its focus to getting out the vote. Tracy Chapman, an artist whose concern for social and political issues is reflected in her work, has frequently lent her voice, her time and her passion to support political empowerment.

“The upcoming presidential election is one of the most critical in our nation’s history. More than ever, every single vote counts, and I want to do whatever I can to urge every American to make their voice heard,” stated Tracy Chapman. “I am supporting Driving Votes because they are doing an incredible job, reaching people on the grassroots, personal level to make registration easy. They are empowering new voters, those that previously felt disenfranchised or unable to effect change. By doing these small shows in these swing states, I hope to remind each individual in those rooms, that they can take action and make a real difference.”

“We are thrilled to have the support of Tracy Chapman as we translate our voter registration efforts into getting out the vote,” said Leighton Woodhouse, Director of Field Organization. “Driving Votes will be relentless in speaking with voters about the stakes in the upcoming presidential election. Driving Votes, through a network of volunteers in the swing states and its collaboration with organizations like America Coming Together and ACORN will empower voters to take back their country from an administration that is dividing America domestically and isolating it internationally.”

Tickets for all shows will go on sale this Friday, September 10th. You can learn more about these events at www.drivingvotes.org or www.atlanticrecords.com

Tracy Chapman tours the West, By John Arnold, ABQJournal.com, Sept 24, 2004:
Singer/songwriter Tracy Chapman has for years encouraged her fans to vote. But in the wake of Florida’s bitterly contested vote tally that eventually led to President Bush’s victory in the 2000 presidential race, Chapman is stepping up her efforts to get out the vote.

“I was just so horrified in 2000 with what happened in Florida and with the way in which I feel our democracy didn’t actually work the way it should,” Chapman said recently by phone from San Francisco, where she was rehearsing for a five-stop tour aimed at getting Democrats to the polls in November… > Read the rest of the article

I didn’t have the ticket and I thought they were all sold out… But i heard about waiting at the door to buy one so I did. Tracy Chapman performed a small venue for Drivingvotes.org. She performed at the Century Ballroom in Seattle on Capitol Hill. The Show was FIRE.

She came out about 30 mins late, which was good cuz sometimes it takes forever to start a show. She started out with a song called “Hound Dog” i don’t think it was the Elvis version… the lyrics were different, and the melody. The number was really bluesy and had a rock edge. I was suprised how energetic she is on stage. She was moving and swaying around with the band, with her dreadlocks going everywhere. She was stunning to see in person. Throughout the performace, she made small statements about politics. I was shocked to see how outspoken she was about her distaste for President Bush. She even went far to say she was “#### off” at the last election results. But Tracy was still kind and subtle about how she said it, so it didn’t come off as mean spirited. It was interesting to see her so open about her views, because it has been said that she is very private. She said that we need to get as many people as possible to register to vote, and hopefully vote democrat. hehe. well anyway here is the list of songs she performed in no particular order

After those songs, she left the stage and the audience was still clapping and stomping away. She did the old leave the stage too soon trick… and we begged for more. She came out and did Give me one more reason… she did the normal version and then immediately after she did a more blues-soul version, saying the lines quicker and with more vocal runs. The tempo of the song is a lot faster than the orignal. She tore that stage up and everybody was dancing. Then she did another blues cover that was amazing… I didn’t know that Tracy’s low vibrato had that much range. She was hitting the high notes as well as the low. She had all the licks and attributes of any skilled blues singer, in fact after watching her i think she should do a whole blues album. she has the skills for it. After that, the intimate set was over. I feel lucky and blessed to witness such a beautiful event. This concert proves that Tracy is a true live performer and she isn’t going anywhere…

The Review: Tracy Chapman’s Driving Votes Swing Tour
Tracy performed with drummer, and bass player in an truly wonderful venue, the Kimo Theatre in downtown Albuqueruqe.Tracy came onto the stage and jumped right into a rockin’ Hound Dog (similar version to the Santa Fe 2003), swaying and singing. Afterwards breaking into a softly sung For my lover. She then spoke of her mission, Driving for Votes garnering cheers and claps (apparently no Republicans in the house–suprise, surpise). She broke into a soulful Telling Stories, then into a spirited Say Hallelujah–the bassist jamming out. Of my three (which went from one to three as I reconsidered the concert) favorites of the concert, All that you have is soul, brought tears to my eyes for Tracy’s intensity and how she had combined into words and notes such feeling. The surprise of the concert was a cover of Nirvana’s Come as You Are that was (imho) as good as the original (special note–except for Tracy’s, I usually dislike covers). Tracy continued with Fast Car which received a strong applause. And then again she spoke of her mission, discussing the importance of being a part of the vote. Then she performed an extraordinary version of House of the Rising Sun which sent me back to New Orleans in a flash. I could almost imagine her playing at some juke joint filled with smoke and whiskey. She mentioned again her purpose–she had warned us at the begining that she would mention at every opportunity–register to vote–especially if you are democrats! It’s incredible the emotion she generated with The Promise even so quietly sung. Tracy then started to introduce a song she had written in 2000 although not released; she wanted to clarify because it was so apt at this point in time in the United States and the world. At one point, during her discussion some male shouted “Sing” which seemed to shock everyone into silence, however Tracy kept talking and begun Conquering America, which was one of my three favorites and again drove me to tears as I mourned for the people who have been slaughtered for the gains of a few and are now as we speak still being killed while “Conquering America.” I realized the ultimate purpose of music and the genius of Tracy–her identification and exposure of those whose voices are silenced. After finishing, she said as she pulled out another flyer announcing the Driving for Votes,”I’m doing this to annoy the guy who told me to sing.” This received an amazing amount of applause from the audience, who finally getting over the shock, realized what had happend. Another Sun started with a dreamy like intro and elvoled into a soulful, almost trip-hop vibe–yet darker. Tracy loading up on the revolutionary spirit continued with Talkin’ about a Revolution. She jaunted off afterwards and the dutiful fans in front pounded on the stage, clapping, and cheering when she returned. Give me one Reason bringing as always wild cheers flowed into the best version of Howlin’ for My Darlin that I have heard…wild applause followed as the theatre lights came on. It was truly a wonderful show.