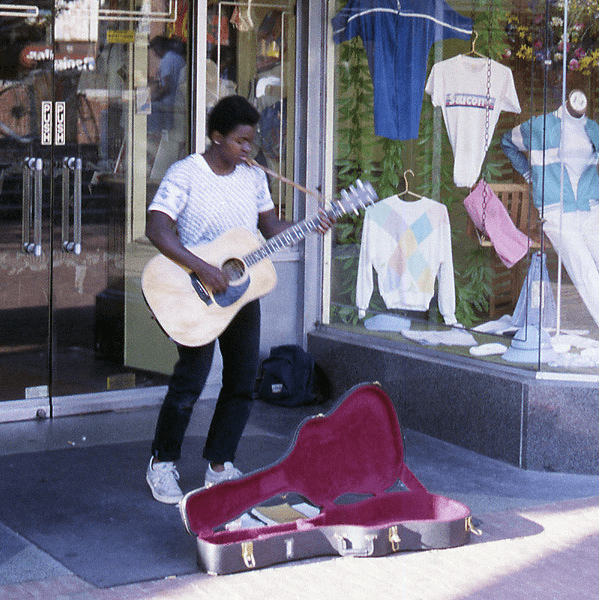 Tracy Chapman performing in Harvard Square in 1985 by Joey Harrison

In a phone interview given to the Boston Globe in 2003, Tracy recalls her performances in Boston:

Tracy Chapman began her music career in Harvard Square, both above and below ground, but mostly above, for she quickly discovered that subway station acoustics were not exactly prime for a musician singing and strumming an unplugged guitar.

“I never wanted to play with an amp, and after a while I found that I couldn’t hear myself over a train. The trains come pretty frequently. It’s pretty difficult to project over a train unless you’re an opera singer. (…)

Busking adds to the quality of urban life to have music in public spaces, and it’s something Boston is known for. It’s part of the city, part of what it’s about. People come up to me all over the country and tell me they remember seeing me in Harvard Square.

I think what I like about it is that in a way, making music in a public space — it’s sort of an experience that epitomizes a democratic free society, what are the requirements? There really are none. It’s about having the nerve to put yourself out there and take a chance, to see if you can do it, to see if people would be willing to stop what they’re doing, look up at you, and listen. That’s music.“

406
shares
FacebookTwitter
1985 Before She Was Famous boston Harvard Square