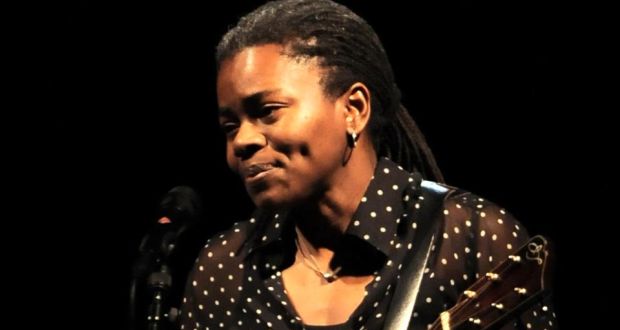 But for a certain famous musician’s temper tantrum, it’s possible Tracy Chapman might have had a completely different career trajectory.

In 1986, at the age of 22, a friend of Chapman’s father introduced her to an executive at Elektra Records. He liked what he heard, she was offered a record deal, and in April 1988 her self-titled debut album was released, along with the first single, Fast Car.

So far, so good: Chapman’s simplistic folk-pop tunes with a social-activist twist caught the ears of critics and, bolstered by Fast Car’s radio play, by the end of April the album had sold a respectable one million copies worldwide.

Come the end of June – and this is where the tantrum comes in – album sales had trebled. Chapman was scheduled to play a short set at the Nelson Mandela 70th Birthday Tribute concert, on June 11th, at London’s Wembley Stadium. But she ended up performing not once, but twice. The second time was because Stevie Wonder abruptly refused to perform, due to a missing piece of sound equipment. He eventually agreed to make an appearance later in the concert, but the die was cast: Tracy Chapman’s life had changed. Within a year her debut album sales surged to more than 10 million.

The way Chapman tells it now, from a distance of 27 years, the surge in profile is something she wouldn’t change. “To know that I’m here right now, putting out a record like this, is amazing,” she says of her Greatest Hits album, in a voice so soft- spoken you have to strain to hear it.

“Of course, there are moments here and there that I would change. But having that success – even though it was overwhelming at that time, and it would be at any time, I guess – gave me artistic freedom and the chance to keep making music that felt right for me. I’m very grateful for that; there’s no reason why I wouldn’t be.”

Chapman viewed the selection process for the collection – a stopgap until her new studio album is released some time in 2016 – as an exercise to take stock of her work, although she says it took some years for her to relent to the record company’s requests for the compilation. “They have been asking for many years; possibly five. I kept resisting. I suppose because I thought it was too soon in my career. But I relented, and I decided this year that we could go forward with it. In fairness to the label, it’s not like I wasn’t ready for it. That said, I wasn’t really thinking about looking back.”

Yet that is exactly what Chapman was presented with as she sifted through her back catalogue (since 1988, she has released eight studio albums, most recently 2008’s Our Bright Future). She sounds almost abashed about the flurries of nostalgia she experienced.

“I found some surprising things along the way,” she says. “Putting it together, we ended up going into the archives for the photos and the masters. Why I don’t necessarily look back is that I don’t listen to my records unless I need to prepare for a tour. People often ask what’s my favourite song, and I say it’s whatever I’m working on: the new song or new idea that’s exciting me. But going back for this was a lovely process; I’m proud of the songs and feel grateful for having had the opportunities over the years to put out music that I still feel good about today.”

Over the years she has been honing her craft. In songwriting terms, what qualities does she have now that she didn’t necessarily have have 30 years ago? “Greater discernment. A bit more rigour. When I was a kid, I’d write about two songs a day, and of course they were terrible. But you have to practice in order to master something.

“I had thought at the time that I had been given an ability, and sometimes it feels like the process comes through me, yet isn’t necessarily of me. I’m thinking about ideas; inspiration follows that, and then it gets the song completed.”

Back then, she would allow the song to be whatever it was; there was an inherent sense, she says, that her first idea was the best, the purest. “Those early songs were written with this method, but over the years I realised that maybe I could shift the emphasis a bit, try another idea, improve on this metaphor or that word, make some changes that will make the songs clearer or even more poetic. So I started to edit myself, and that’s the most conscious change between songwriting then and now.

“That said, there’s something about the initial ideas that come in creative moments that are often the most interesting, because your mind is taking you some place that is outside of what you typically do.”
Chapman likens it to breaking a pattern or changing a habit. “And in the process of completing something, you have to figure out a way not to overwork it. If that happens, it can lose whatever made it seem workable, or even unique, in the first place. It’s a balance, really.”

TRACY CHAPMAN ON THE GLARE OF THE SPOTLIGHT

“Being in the public eye and under the glare of the spotlight was, and it still is, to some extent, uncomfortable for me, but there are some ways by which everything that has happened in my life has prepared me for this career. But I am bit shy.

“I love books, I love reading, and I basically grew up in a public library. I’ve always loved poetry, music was always in the house, and there was such a range of different music around. My mother sang, my sister could sing, music was so much in the fabric of my life and upbringing. At the same time, I have this personality that is a bit on the reserved side, and which had never really sought out the limelight. That has made me perhaps not the ideal person for this job.”