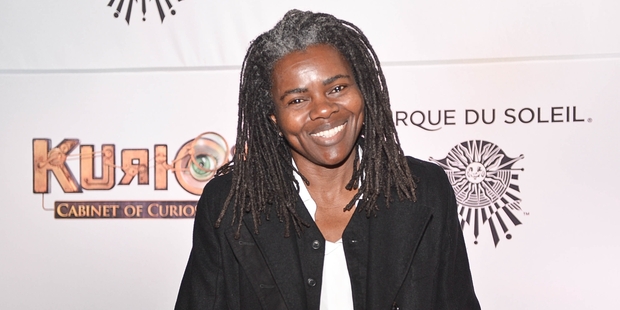 The phone finds Tracy Chapman at the Chateau Marmont. She remembers staying at the famous Hollywood hotel back in 1987 after Elektra Records first signed her and put her in a nearby studio to record the self-titled debut album which changed her life as it went on to sell more than 20 million copies and become one of the great albums of the decade.

It’s a compilation that takes an 18-song overview of the eight albums of her career and adds her take on Stand By Me, which she played on one of David Letterman’s final Late Shows earlier this year at the invitation of the host, a long-time fan. 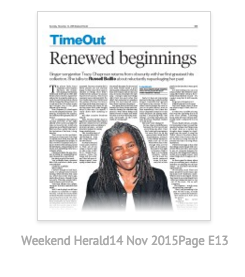 That return to the spotlight, having not released any new songs or toured since 2009, was also the spur for the greatest hits project. It has involved Chapman and producer of three of her albums, David Kershenbaum, remastering the old tracks and assembling them into a cohesive whole.

Chapman admits she was reluctant at taking on reassembling her past releases into a new album.

But she’s proud of the result.

You’ve finally done a greatest hits. Did you have to have your arm twisted?

I haven’t thought to look back, really. I’ve always been forward-looking. When the idea first came up, which was some years ago, maybe five of more, I thought it was too early. This time around obviously someone convinced me.

Your first album was a phenomenon. Was it too much to deal with?

Well, I was hoping I would have a chance to continue to make records. I think the record label certainly wanted to sustain the success of that first record. But I myself did not have that as a goal. I think ultimately the most important thing that came from the notoriety and the record sales is that I gained some creative freedom.

Was the first album a big shadow to get out from under?

Um. I don’t know. I mean, you know, no in a way it wasn’t. But I think, for sure. The second record disappointed the record company. They wanted for me to essentially make the same record again and to be something they felt would resonate with a wide audience the way the first one did and that didn’t happen. I wasn’t disappointed by that and I wasn’t surprised. But you certainly feel it when people are not entirely happy. So that cast a bit of a pall or shadow on things. But I didn’t really feel the pressure to sustain that level of success. The record company were surprised with The New Beginning record [1995] and the success of Gimme One Reason and that made them have some renewed interest and hopes for me and my career. But I never thought about it that way. For myself, I really didn’t have anything to prove.

Has that creative freedom lasted?

Yeah. Not that I didn’t have to fight for it some times. But I think it gave me a chance to try to develop as a musician and a recording artist at my own pace – an inner direction instead of coming from outside forces.

The tracklisting of the greatest hits isn’t chronological – does the song order tell its own story?

In a way it does and I take some credit for it. They are all my songs so I guess I get to take some credit for it. I made the sequence, chose the songs and the order and I had all sorts of things in mind. I was trying to think about the overall dynamics for the record and what would make a good starting and ending point. Then the keys and tempos and all that and also, of course, the subject for each song – trying to make sure things didn’t butt into each other that didn’t feel connected or somehow jarring. For me it does tell a story but it wasn’t entirely intentional

You must have gone back and listened to those songs quite intensely during the remastering process. Were there things you rediscovered or made you smile because you were hearing yourself, especially on the early stuff, at a young age?

Has your voice changed?

For me, I hear a real difference between the first record and everything else after. I feel like I relax and I am singing a bit more like I do on my own and also I think David [Kershenbaum, producer of the debut] wanted to make sure all of the words were clear. Even though they are live takes, he focused on that and he was right to because I hadn’t been in a recording situation before and he knew the words mattered to me. So it honestly felt a little painful at the time but it was a good lesson.

It’s interesting you say you relaxed after the debut because songs like Talkin’ about a Revolution from the first record – it’s a quiet song but it still sounds angry.

It’s got a lot of urgency to it.

Which helped it set it apart

Yeah and maybe more so than any other songs, I think, that I recorded.

So that was a political song that was the opening track on your first album. Listening back, is the 20-year-old you politically naive compared to you now?

Ah yes. Maybe still am, actually. It’s interesting to hear you ask that question because two things came to mind. How as a person my thoughts have changed or developed over the years. A song like Talkin’ About a Revolution that I wrote when I was 15 years old and for me that is a song not only of protest but that is a song about aspirations.

I believed strongly at that time that things could change with concerted effort and will. I have come to see, as I assume happens for everyone, that things don’t happen as fast as you might expect. And some things don’t change at all, it seems.

So there must be times when you are walking past a busker and they are playing one of your songs – or you hear one in the supermarket?

Oh certainly, yeah. There are times people for some reason put my music on if I walk into a store. Which is nice in one regard. I know they mean it as a compliment but it often just makes me want to run out of the store. I’m so self-conscious.

The shyness – was it a way of protecting yourself?

Was I just pretending to be shy? No this is me, it really makes no sense the business I have ended up in. But I am a shy person.

That has never changed?

I think it has but I have learned to manage it a little better because I have to be social when I might not choose it. I try not to let shyness overwhelm the situation.

Has it affected your live work at all or is that a different thing?

It’s different. Having the song as a way of communicating with the audience, I get to let the music speak for me.