The Nelson Mandela 70th Tribute Concert was held on June 11, 1988 at the Wembley Stadium, London. To celebrate Nelson Mandela, the biggest stars performed songs of freedom, hope and love in front of 72,000 people at the Wembley Stadium and more than 600 million television viewers from 60 countries who watched the broadcast. Tracy Chapman burst out there performing Fast Car, Across the Lines, Why?, Behind the Wall & Talking ’bout a Revolution.

Tracy Chapman performing Across The Lines, Talkin’Bout A Revolution and Fast Car at the Nelson Mandela 70th Tribute Concert:

The concert released on laserdisc, VHS and is now available on DVD in a (bootleg?) brazilian edition:

Tracy Chapman recalls to Nigel Williamson: “They didn’t have a slot for me and I was kept waiting, it was just me and my acoustic guitar and I think they called me three times hoping to put me on while the next act was getting ready.” On each occasion it didn’t happen, and three times she was sent back to the dressing room and told to wait again.

Then, just as Stevie Wonder was due to go on in a prime time slot, he told dismayed organizers that his computerized programs had gone missing and he could not appear without them. In a panic, they called for Chapman.

“I literally had to run to the stage, dragging my guitar cable, she recalls. When I look back at the footage I can see how unprepared I was. But I think it also meant I had no time to feel the pressure.”

Extract from her interview with Tavis Smiley:

Transcript
(…)
Tavis: Just a little different. You burst onto the scene, and a lot of people got to know you when you performed at Nelson Mandela’s 70th birthday. Take me back to that moment and tell me how you wound up on that stage, and what that did to bring you to the attention of music lovers everywhere.

Chapman: It was an incredible opportunity. And I don’t know exactly how it came my way. But I was invited to go, and I think the idea was that they would put me on at some point in the show. I wasn’t slotted for a particular moment. But because I just had an acoustic guitar, it would be easy to just put on in any spot. And so I was waiting most of the day in the greenroom. And, you know, just amazed to be there because there were all my, you know, musical heroes.
And it was a wonderful event to celebrate Nelson Mandela, even though at that time he was still in jail. But, you know, to bring world attention to the plight of people in South Africa, and to Nelson Mandela’s, you know, experience of having been in jail for 17 years, I think at that point. But there I was waiting, and they called me numerous times saying, “We’re ready for you.” They weren’t quite ready for me, and they sent me back to the greenroom.
And then at the very last minute, Stevie Wonder was about to go on, and they didn’t have a certain piece of equipment that they needed, and they called me again, and I ran to the stage, dragging my guitar cable, and they kind of shoved me out there, and there I was.

Tavis: The rest, as they say, is history.

Chapman: Yeah, and I think it was the best thing that could have happened that particular day, that I didn’t have time to prepare, you know. I was – just had to get out there and do it. And so nerves didn’t have a chance to really kick in.

(…) An event that brought much of this together was the 70th Birthday tribute concert or South African black nationalist Nelson Mandela, held at London’s Wembley Stadium on June 11 and watched by a television audience of literally hundreds of millions throughout the world.

Live Aid (which raised money for the African famine) had been held at the same stadium three years earlier, with a parallel concert in Philadelphia, but it was never as directly political as this demand that the South African authorities free one of the world’s best-known political prisoners as a major step in the dismantling of the apartheid system. The concert attracted such major stars as Whtiney Houston, Dire Straits, Stevie Wonder, Sting and Eurythmics, but it was most remarkable for its range of popular music. There were soul artists, rap artists, reggae artists, and African musicians, as well as collaborations between different groups. When the laid-back (but highly political) U.S star Jackson Browne performed with musicians from West Africa and Jamaica, it was clear that the event was also a reflection of the growing spirit of internationalism in popular music.

Such idealism was reflected in the second major pop-political event of the year, Amnesty International’s Human Rights Now! Tour, in which five performers, including Bruce Springsteen, Sting and Peter Gabriel, embarked on an unprecedented six-week series of concerts from London to Buenos Aires, Arg., via cities in Europe, Africa, Asia and the Americas. The aim was to encourage worldwide support for the human rights organization and publicize the fat that this was the 40th anniversary of the UN’s adoption of the Universal Declaration of Human Rights. When the tour reached Harare, Zimbabwe (where the show was dedicated to Nelson Mandela and to murdered black activist Steven Biko), Springsteen urged the many white South Africans in the audience not to join the Army “in a country at war with itself.” 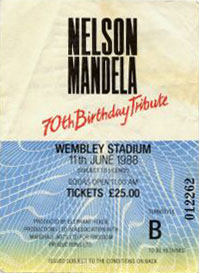 The impact of consciousness-raising (as opposed to money-raising) events is hard to judge but inevitably, the show also had a commercial impact –particularly on the career of one black U.S. singer taking part. Tracy Chapman was little known when she appeared at the Mandela show, but although she was a soloist armed only with an acoustic guitar, she faced the vast worlwide audience as confidently as if she were singing in a small club –then faced them again when she was asked to fill a gap in the proceedings after part of Stevie Wonder’s equipment had been stolen. A few weeks earlier she had been playing to tiny audiences on the folk circuit, but by capturing the mood of the Mandela show, she almost instantly became a major star.

Chapman’s was the most remarkable success story of a good year for new female singers, which also included Toni Childs and Debbie Gibson in the U.S. and Philadelphia ex-patriate Gain Ann Dorsey, Mica Paris, and Tanita Tikaram in Britain. Whitney Houston (whose “One Moment in Time” provided theme for one U.S. network’s coverage of the Olympic Games) remained the most popular female performer, though the classiest recording of the year was by Detroit soul star Anita Baker, with “Giving You The Best That I Got”, her long-awaited follow-up to the best-selling “Rapture”. (…)

– From the British Encyclopedia

(…) Tracy Chapman walked out alone on to the sidestage at Wembley Stadium at 3.05 in the afternoon, performed three songs ; later, at 5.41, after someone had made off with a computer element from Stevie Wonder’s synclavier, she was importuned to go out again and perform a further couple of songs. By the time she had finished, the slow build that had been accompanying the release of her album at the beginning of April had turned into a torrent. The Nelson Mandela Concert made Tracy Chapman a world star almost overnight.

According to Ken O’Neill of Elephant House Productions, the concert’s director, “Tracy Chapman just captured the spirit of the day somehow. We’d chosen her because she’s fresh and exciting and the nature of her material was totally appropriate to the day. When we had the problem with Stevie Wonder, she was ideal to go back on, a solo act with just an acoustic guitar. I think part of her appeal was her bravery as a new artist standing out there almost alone in front of 74,000 people, let alone all the people watching around the world, the vast majority of whom didn’t know who she was. And the crowd took to her in a very British way. This little girl on a sidestage had as much impact as any large band and that translated to the people at home and somehow summed up the mood of the day. It was very different to the revival of Queen at Live Aid”.

Tracy Chapman’s instant success following the Nelson Mandela concert underlines the power of global television, even when confronted with a virtually unknown artist. For once, television told people something they didn’t already know. The week after the concert, Chapman’s LP shot from 25 to 2 in the British album charts and was soon followed into the Top 10 by the single Fast Car. The LP has now sold half a million copies in Britain alone. The same story has repeated itself at varying speeds around the world. The LP has topped charts in Australia, Canada, Holland, Belgium and will shortly march this feat in Germany and the US. The Nelson Mandela Concert was shown in some 64 countries and already this very private artist sold over 2 millions albums worldwide. In America, Tracy has succeeded by virtue of instore play in record shops, the support of MTV and the press. She is currently on a club tour of the US after which she will tour with Neil Young and then Bob Dylan before joining the Amnesty Tour alongside the likes of Springsteen and Peter Gabriel. After a November 20 concert at New York’s Carnegie Hall, Chapman will disappear to write the remainder of her next album before reappearing next spring or summer, possibly with a band.