Musician Tracy Chapman was among the spellers competing at “A Spelling Bee for Cheaters”on February 17th at Herbst Theatre in San Francisco. The event was organised by the creators of the 25th Annual Putnam County Spelling Bee, 826 Valencia (a San Francisco literacy organization offering tutoring and workshops for kids and adults) and City Arts & Lectures.

Tracy was candidate #6,  correctly spelled “cow”, “hoa” and “merkin” made it to the third round and raised $5,000. Read this great review of the event online 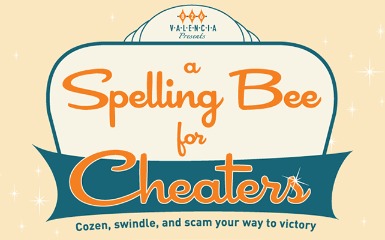 Why have 826 Valencia, a nonprofit dedicated to helping students with their writing skills, the highbrow City Arts & Lectures and the “Putnam County Spelling Bee” colluded to promote cheating on spelling, especially at a time when cheating is the norm, thanks to the ubiquity of spell-check programs? Because a spelling bee that dishes up local celebrities and crowd-sources participatory teams of cheaters makes for a good fundraiser.

Next Thursday at 7:30 p.m., Herbst Theatre will be the site of the San Francisco Spelling Bee for Cheaters, the proceeds of which go to 826 Valencia, the Bay Area student writing and tutoring program that writer Dave Eggers co-founded in 2002 […]

The event works as follows: Those who wish to participate create a team of up to 10 people who raise money for the ability to compete and cheat in the bee. Interested parties may sign up at www.826valencia.org/ Each team that has raised at least $1,000 then nominates one person to represent the group onstage. Feldman, her husband, Jay Reiss, and her sister, Liz Feldman, will serve as judges. Writers Michael Chabon, Daniel Handler and Lisa Brown; musicians Tracy Chapman and Thao Nguyen; and “Mythbusters” host Adam Savage will serve as the celebrities. When a contestant gets stuck on the spelling of a word, he may request a cheat from his team. The cheats do not come cheap: A one-letter clue is $500; a second try costs $750; a peek in the dictionary is priced at $1,500; for $5,000, contestants can skip the round; and, for $25,000, well, probably just buy the trophy. […]

Tickets for the event are $25-$75. There’s also a 6 p.m. $200-per-ticket VIP party, where attendees may hobnob with celebrity contestants. Read more

Listen to Liz Saint John’s radio interview of the creators and participants of the Event next:

This Thursday, February 17, local non-profit 826 Valencia joins forces with the creators of the Tony Award-winning 25th Annual Putnam County Spelling Bee and City Arts & Lectures to present a Spelling Bee for Cheaters at the Herbst Theatre. With a slogan like “Cozen, swindle, and scam your way to victory” and a star-studded lineup of celebrity contestants, this fundraiser (proceeds from all tickets sold will go to funding free programming at 826 Valencia) is not to be missed.

While volunteering at the after-school tutoring program, I caught up with a handful of students, 826 Valencia staff, and some Spelling Bee for Cheaters contestants to find out how they feel about spelling, the hardest words they’ve ever had to spell, and what advice they’d give to spelling bee participants. Kids (and adults) really do say the darndest things!

What comes to mind when you think of a spelling bee? And how would you feel about competing in one?
Ivan, age 11: A bee that spells.
Lilia, age 13: I think of nerds. No offense to all the nerds out there.
Alex, age 11: I would feel excited like a monkey with 4,000 bananas.
Biridiana, age 6: It makes me kind of nervous.

What advice would you give to someone who was nervous about being in a spelling bee?
Melody, age 8: It’s ok, don’t worry, you’ll do a great job, I think you might win.
Giussepe, age 9: I’ll kick your butt if you lose.
Marco, age 12: Relax, study, memorize words that may come up, and feel confident in yourself.
Esteban, age 8: Sorry about the words.

John Vanderslice, 826 Valenica tutor, Spelling Bee for Cheaters celebrity contestant: The winner will most likely be an overachiever who sleeps in an oxygen tent in between 14 hour days of memorizing the Oxford English Dictionary. We can’t all be that weird.

What is the hardest word you’ve ever had to spell?
Jasmine, age 9: Electricity.
Valeria, age 13: Orthodontist.
Yovana, age 9: Supercalifragilisticexpialidocious.
Lilia, age 13: Ruelas. It’s my last name but I spell it wrong sometimes.
Vickie, 826 Valencia Programs Director: When I was little, “through,” because of “though” and “thorough” made it hard for me to tell them apart.
Biridiana, age 6: Rescue.
Edgar, age 14: Antidisestablishmentarianism.

Miranda, 826 Valencia Programs Coordinator, Spelling Bee for Cheaters contestant: Eighth, which I have to spell every day because I work with eighth graders. Probably not the best word to be bad at.

John Vanderslice, 826 Valenica tutor, Spelling Bee for Cheaters celebrity contestant: Floccinaucinihilipilification (Noun, def: the estimation of something as valueless, encountered mainly as an example of one of the longest words in the English language.) I was eliminated by the second “c.”

Who would be on your spelling bee Dream Team?

Who would be on YOUR dream team? It’s too late to compete in this particular event but the night promises to be entertaining for participants and audience members, alike, so buy your tickets now! 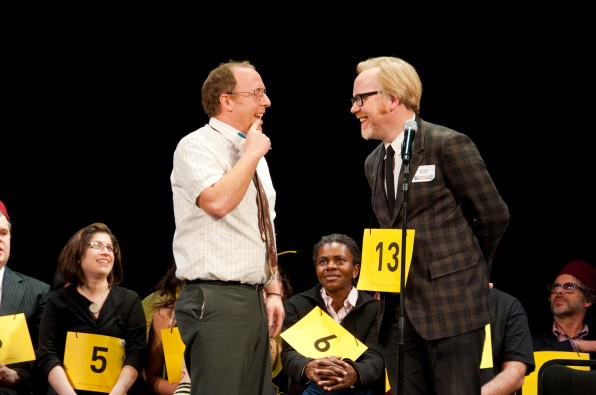 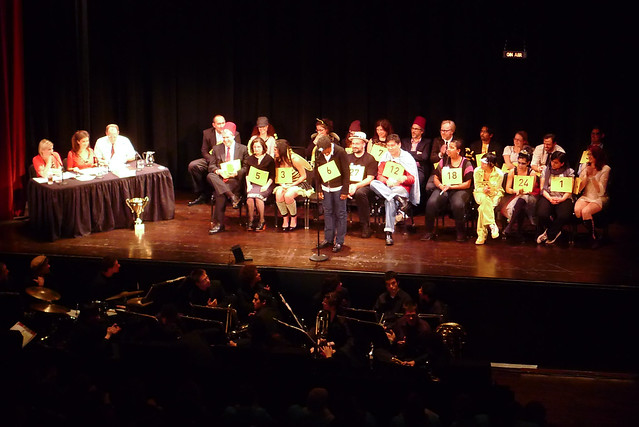 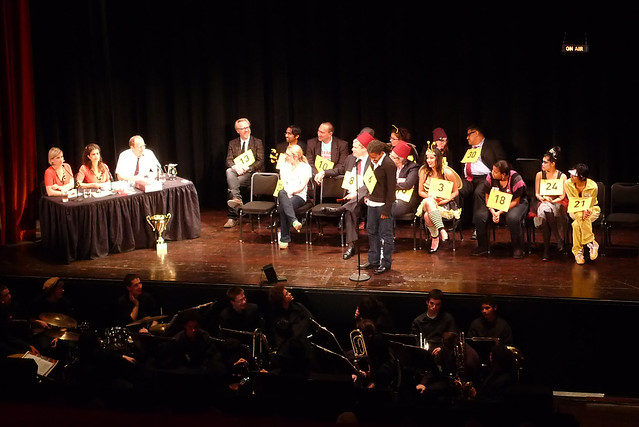 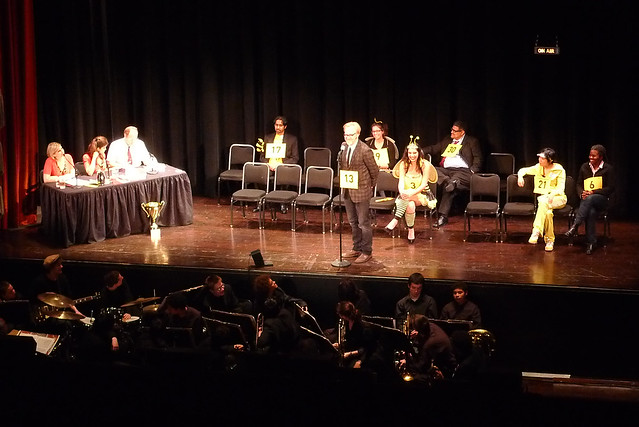 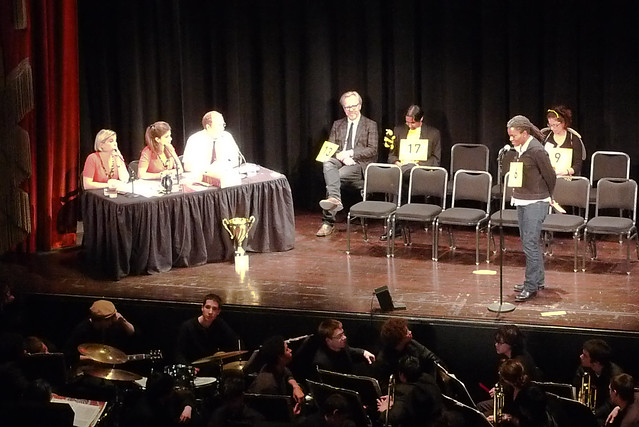 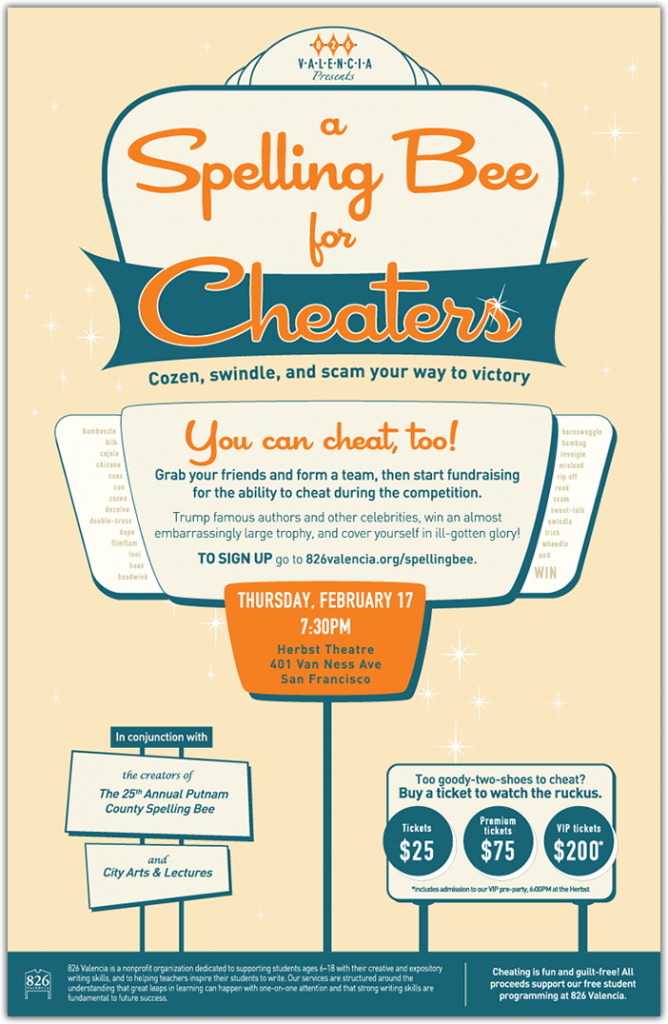