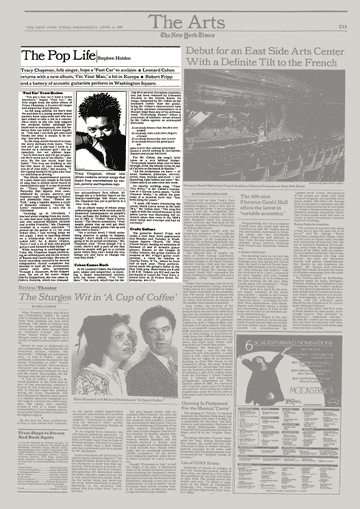 ‘Fast Car’ From Boston ”You got a fast car/I want a ticket anywhere,” begins ”Fast Car,” the first single from the debut album of Tracy Chapman, a 24-year-old singer and songwriter from Boston.

As the song unfolds, we learn that the narrator is a young woman whose parents have separated and who has quit school to take a job in a convenience store so she can help support her alcoholic father. Although her boyfriend is unemployed, she still believes they can build a future together. ”You and I can both get jobs/And finally see what it means to be living,” she tells him.

As the song moves forward in time, the story darkens even more. ”You still ain’t got a job/And I work in a market as a checkout girl,” she admonishes, but not without hope. ”You’ll find work and I’ll get promoted/We’ll move out of the shelter,” she says. By the last verse, hope has faded. ”You stay out drinking at the bar/See more of your friends than you do of your kids,” she accuses. ”I ain’t going nowhere/So take your fast car and keep on driving.”

This bleak, unsentimental portrait of a poor inner-city couple is the kind of song that is almost never heard in contemporary pop. It is one of several on ”Tracy Chapman” (Elektra Records) that depicts lives overwhelmed by racism, poverty and hopeless rage. The language is direct and absolutely clear. ”Behind the Wall,” sung a capella, depicts a cycle of domestic violence. ”Across the Lines” remembers a race riot in Cleveland.

”Growing up in Cleveland, I learned about singing from my mother, who had once sung professionally and who admired Mahalia Jackson and Aretha Franklin,” Ms. Chapman recalled in a recent interview. ‘‘I picked up the guitar at 11, but even before then, I was writing songs on the organ. I went to boarding school on a scholarship with a program called ABC, for A Better Chance. There I met a lot of kids who played guitars and listened to Bob Dylan.”

While majoring in anthropology at Tufts, Ms. Chapman began performing in coffeehouses and on the streets of Boston and Cambridge. She was offered recording contracts by several independent record companies but decided to hold off her professional career until after graduation. Through a classmate, Brian Koppelman, the son of the music mogul Charles Koppelman, she was taken to Elektra Records, which has released her extraordinary first album. Although she is a familiar figure on the Boston-Cambridge folk music axis, Ms. Chapman has yet to perform in a New York club. Since her tough and tender urban folk-pop doesn’t fit neatly into any radio formats, she faces the same marketing hurdles that have confronted Joan Armatrading, Suzanne Vega and other serious pop artists whose work is not designed to commercial specifications.

”The way popular music is categorized and formatted cuts down on everyone’s options,” Ms. Chapman said. ”And although people don’t talk about it, there are a lot of issues of race determining musical categories of what’s rock, R&B, or even folk. It ends up restricting creativity.”

”On a certain level, I think something positive is going to happen, though I don’t think it’s necessarily going to be an actual revolution,” Ms. Chapman said. ”Even though I’m a cynic, there’s still a part of me that believes people will get to a certain point where they can’t stand the way things are and have to change the way they think.”