This article originally appeared in the Nov. 18, 1982, edition of The Tufts Daily. 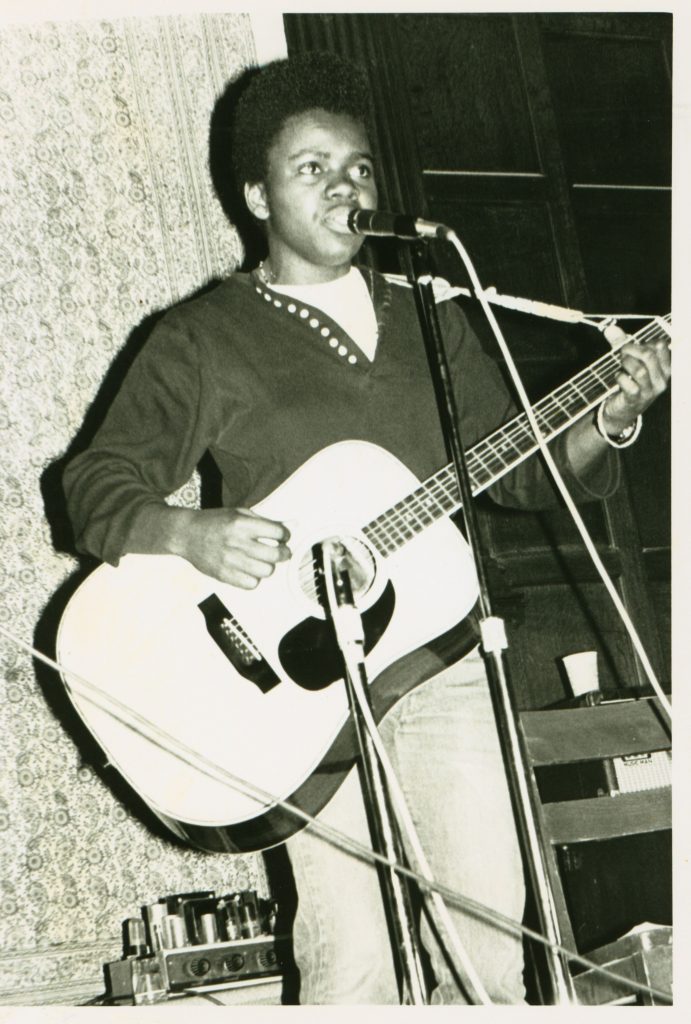 The crowd applauded wildly. Even loyal friends and relatives of the opponents hesitated at first, but then humbly acquiesced to the to the common verdict. “Tracy, Tracy, Tracy,”, roared the crowd. What was all the raucous excitement about? Yes, it was a Saturday night and surely that contributed to the raised decibels in MacPhie Pub. Nevertheless, on any night of the week, a certain degree of noise would be generated. The base of this hubbub lay in two words: Tracy Chapman.

The name may not be immediately familiar, or distantly for that matter. Chapman is in her freshman year at Tufts. So what is all the pandemonium about, this Tracy Chapman, a mere Jackson freshgirl? Easy question … she sings.

“I sing because I like it. It’s a form of expression. Some people write poetry, some people draw cartoons, and I sing.”

And sing she does. At the Tufts Annual Student/Faculty Talent Show, Chapman won first prize. Although she contested her talent against fourteen other worthy opponents, she triumphed considerably. Don Klein, of Spirit, noted, “Tracy was only the 2nd in a lineup of 15 acts, but you could tell the way the audience received her, that she was the obvious winner.”

Chapman entertained the Pub audience with two of her own compositions. The first song, entitled “Baby, Can I Hold You?” seized her listeners’ attention, preparing them for her second song which remains untitled. Accompanying herself on her guitar, Chapman won the audience over with her originality, style and talent.

Composing music is not new to Chapman. She has written over 200 songs, including both lyrics and melody, for her guitar. Obviously, Chapman considers her music to be more than a diminutive hobby, she has been playing the guitar since she was 12 years old, but began to seriously focus on it during her high school years. “I attended the Wooster School, I took guitar lessons for a year, but I basically taught myself.” Chapman disclosed an engaging anecdote, about how she acquired her present Fender guitar. “I played for a lot of students at Wooster, but I had a cheap guitar. Pretty soon, word got around and the Chaplain wanted to hear me play. He advised me to get a good guitar. It just so happened that one of my good friends’ family had a multitude of guitars. He loaned me a guitar for about a month. Toward the end of the month, I returned Martin’s guitar, but was determined to get a decent one for myself. My mother came up with $100 for the guitar, but the Chaplain noted that I couldn’t get a decent guitar for that amount of money. I looked around anyway, but finally agreed that $100 wouldn’t do the job. One day, the Chaplain asked me to come to his office and he presented me with a check for $272. It so happened that I’d been playing at chapel services and school coffeehouses. The money came from the Chaplain and his wife, the school administration and faculty.”

With the check, Chapman travelled to New York City to purchase the guitar she presently owns.

Chapman’s interest in singing begins even prior to her interest in the guitar. She noted that her singing goes back to before she can really remember, adding, “When you’re a little kid, you sing a lot, but people don’t think of you as having a really great voice, but … I made a lot of noise.”

Chapman, when asked whether she has studied professionally, answered, “No, but in grade school, I was in the choir. I hated it. I didn’t like what we sang and I didn’t like the choir director. I guess it’s left an impression on me. Now, I shy away from choirs and things like that.”

Chapman’s mother was a first soprano in a band. She sang both gospel music and lounge music. “I sang a lot of the stuff that she sang,” but Chapman refuses to attribute her interest to maternal influence.

Chapman writes songs and although she does not exactly pinpoint a singular reason for this interest, she often reflects on her music.

“I started writing (music) when I was 12. I was writing poetry before then. Unfortunately, I don’t write poetry anymore, but now I write songs.”

When questioned if Chapman considers her song composing as setting poetry to music, she immediately said, “No, I don’t. They are different.” She continued on, “For anyone who wants their ideas expressed in this country, poetry isn’t a great vehicle. I think it’s something like 3% of the population who read poetry. Poetry calls for the actual reading, attention … but with songs, you can do anything while you listen.”

Chapman does not follow impulse when writing songs. “I guess I’m inspired by people and events I see, but I write about ideas or emotions. It’s what the word inspiration implies. It’s hard to explain. It’s when I see something or hear something happen. I think … I’d like to write a song on it. Or later on, I reflect on it. It just happens … It just is.”

Although she believes that she can relay emotions of others in her music, Chapman does not think that she tries to deliver messages through her music. “It’s just that you can become anything or see anything. You don’t really have to have done it. It comes to the fact, that you can fabricate. Other people who don’t create, don’t do that. They really do … They just keep it to themselves in their dreams and their daydreams…”

“People always ask why my songs are always sad. I think it’s just that it’s easiest to write depressing things because when you’re happy, when you’re feeling good about yourself, you don’t feel a need to write because you’re active, you’re involved in something. When you become depressed or frustrated, your writing … it seems to understand whatever it is that’s depressing or frustrating you.

”When I write, I write often times of a need to understand something.”

Chapman commented that although she prefers to sing her own compositions, she does sing renditions of recognized tunes. “Whenever, I’m asked to perform, and people ask to listen to the stuff that I write, I do. When they aren’t willing, I sing things that I like.”

When asked if she could categorize her style of composing Chapman admitted, “No, not really. I’d like to think that every song I write is different than another song. I guess if you wanted to call it something that everyone else could know what you were talking about, I would call it a cross between folk and blues.”

That response triggered yet another factor in Chapman’s music, does it possess any similarities with the music of musicians whom she admires?

“No. In fact, I, Tracy Chapman, own six albums. I do listen to more but that’s not many albums for someone who considers herself a musician.”

“One of my all time favorites is Joan Armatrading, also James Taylor, Billy Joel … I guess basically one of the reasons why I don’t own that many albums because well, I appreciate their styles and the music they produce … but commercialization … they try to sell you, not your music, you know, posters and sensationalizing articles. The way they talk about their private likes and dislikes.”

Chapman responded to an inquiry of whether or not an interview was too personal for her. “Well, not really, because I’m ultimately in control of what I want you to know. There’s no way a person can get himself or herself trapped in an interview. Either you answer a question, or you don’t.”

Chapman seeks higher stakes in her musical quest, but remains apprehensive about the possibility of a musical career. “I like playing and performing for the most part, but they’re millions of other people who like to do those things too … who want to be famous.”

Chapman disclosed that she was offered a contract by a small recording company this past summer. “I didn’t take it for several reasons. I would have had to pay for part of it. I would have had to promote their records. I had already signed myself away to attend Tufts. I decided to take a safer route because college was definite, and I didn’t really trust them.”

0
shares
FacebookTwitter
Before She Was Famous interview Tufts University