Fast Car is Tracy Chapman’s most popular song: written in 1986 it’s one of the last song she wrote before recording her first album, known under the name of The Debut Album, it’s also her biggest hit worlwide. Learn everything about Fast Car in this article! 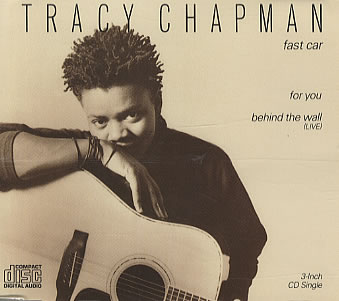 Soon after she performed Fast Car at the Nelson Mandela 70th Birthday Tribute concert on June 11, 1988, Chapman’s song began its rise on the US charts; it became a Number 6 pop hit on the Billboard Hot 100 for the week ending August 27, 1988. While it’s her biggest hit in the USA, Fast Car didn’t release as a single worldwide. In France for instance, it wasn’t even air on the radio, maybe because cars are not that much into French culture (but the Revolution is, that would explain the Talkin’Bout A Revolution success in this country). Fast Car won the “Best Pop Vocal Performance Female” 1989 Grammy Awards (and was nominated that same year for the  Song of the Year “Fast Car”).

Many many fans can relate to this song (if you’re not convinced then buy this Dear Tracy book) and for most of them, it remains the song that made them know Tracy Chapman. Not a day without hundreds of people mentioning Fast Car on Twitter, not a day without someone purchasing this song on iTunes.

If you attend a Tracy Chapman concert hoping that she will sing it then you will be lucky, Fast Car is always included to the setlist. Waiting for this bright day, look at live videos of Tracy Chapman singing Fast Car live.

Tracy Chapman talked about Fast Car on the BBC radio in 2010: “In United States, “Fast Car” was the song that was played on the radio, more than “Talkin’Bout A Revolution” so it was something that turned out to take a significant role in shaping my first record and probably the public perception of me as a singer songwriter who is writing about stories, songs which tells stories about people lives and very generally represents the world that I saw it when I was growing up in Cleveland, Ohio, coming from a working class background. I’ve raised by single mom, I was just watching people, being in a community of people who were struggling. So everyone was really just 1. Working hard 2. hoping that things would get better.

In part everything that a person writes is autobiographical but the songs are directly so and most of them were not and Fast Car wasn’t one that was directly autobiographical. I never had a Fast Car, it’s just a story about a couple, how they are trying to make a life together and they face challenges.

I definitely felt the emotionality of the song that there were something… You never know how other people are going to respond to it and this is not that relevant but one thing I remember about writing the song that it was late in the evening and at the time I had a small dog, a Miniature Dachshund, and the dog was staying up with me. She didn’t always stay up if I stayed up late, I think she was sitting on the couch right next to me, when I first started writing the music and the first few lyrics, I think the first part of the song that came to me was the first line “You’ve got a fast car…” I just feel that I remember in a way that she seemed to be more procked up than usual. So I don’t know if she felt my energy or if she was just not as tired as she normally was but it was kind of funny to have her there for the process of the beginning of writing that song 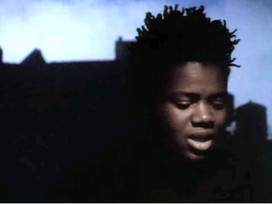 I had so many people come up to me and say that they felt it was their song and someone told me at one point that they thought I’ve been reading their mail, they were saying “You seem to know my story” and people would come up and tell me about a car relationship and some detail that they felt was in the song that represented something that happened in their lives.”

On March 25, 1996 Tracy Chapman was telling to CIDR : “I believe that I wrote the song “Fast Car” in 1986. At the time that I wrote the song, I actually didn’t really know who I was writing about. Looking back at it, and this happens with other songs as well, that I feel like I understand it only later… I think that it was a song about my parents… And about how when they met each other they were very young and they wanted to start a news life together and my mother was anxious to leave home. My parents got married and went out into the world to try to make a place for themselves and it was very difficult going.

My mother didn’t have a high school diploma and my father was a few years older. It was hard for him to create the kind of life that he dreamed of… With the education that he had…. With the opportunities that were available to him… In a sense I think they came together thinking that together they would have a better chance at making it”

Fast Car meaning: fans give their own interpretation of the song

You can read some other interesting opinions on songmeanings.com

This video was shot by Matt Mahurin in 1988 (he’s also the one who took the picture of Tracy’s Debut Album cover) was nominated to the 1989 MTV Video Music Awards as Best Female Video. The video didn’t win but is still heavily aired on MTV:

In the original edition of Tracy Chapman’s debut album (LP / Cassette / CD), all lyrics were printed in English but also translated into French, Spanish, German and Italian. A very good way to have her message understood by everyone. Read Fast Car lyrics translated in other languages

Fast Car in the Charts

“Fast Car” is one of the most covered Tracy Chapman song with “Baby Can I Hold You” and “Give Me One Reason”. In 2011, “Fast Car” knew a big revival, with Justin Bieber singing it at the Live Lounge: