The Bridge School Benefit is an annual non-profit charity concert held in Mountain View, California every October at the Shoreline Amphitheatre. The concerts are all organized by musician Neil Young and his wife, Pegi.

Proceeds benefit the Bridge School, which assists children with severe physical impairments and complex communication needs. One of the thrusts of the program is the use of advanced augmentative and alternative communication systems and assistive technology. 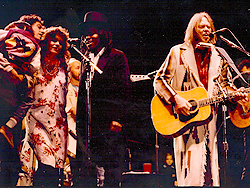 Contrary to her previous performances, Tracy didn’t perform solo, she was accompanied on stage by Steve Thornton on percussion 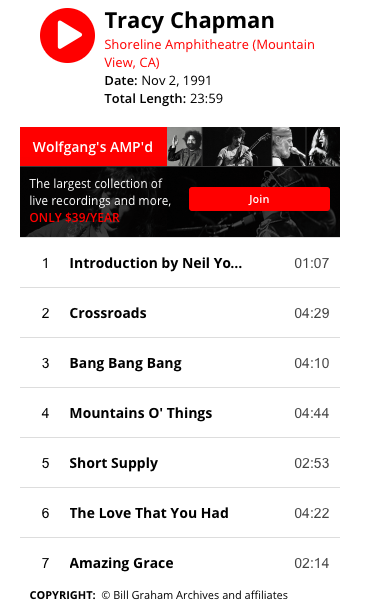 The annual Bridge School Benefit has become a highlight of the Bay Area’s concert schedule since in began in 1986. Founded by Pegi Young (married to Neil Young), Jim Forderer, and Marilyn Bozolich, The Bridge School developed educational programs to service the special needs of Bay Area children with severe speech disabilities and physical impairments and has been serving the community for well over two decades now. The annual fundraiser concert has gained support from many of the biggest names in the music industry, with artists performing special acoustic-based sets in the outdoor setting of the Shoreline Amphitheater in Mountain View, California.

The fifth annual Bridge School Benefit took place on November 2, 1991, and featured performances by Larry Keegan, John Lee Hooker, Don Henley, Nils Lofgren, Tracy Chapman, Sonic Youth, Willie Nelson, and of course, Neil Young. On this night, Young would perform with a reunited Stray Gators, the musicians who played on his blockbuster Harvest album and would soon be featured again on his forthcoming album, Harvest Moon. It was an emotional time in general for the Bay Area, as the legendary concert promoter Bill Graham had recently been killed in a helicopter accident and his public memorial service and concert was to be held the following afternoon in Golden Gate Park. (These sets are also available here in the Concert Vault.)

Tracy Chapman released her impressive debut album in 1988, approximately three years prior to this concert. “Fast Car,” the album’s first single, gained immediate attention and garnered strong sales by vividly communicating deep feelings in a manner that belied her young age. Her messages resonated strongly, as the album would soon go multi-platinum and win four Grammy Awards. This unique ability was no doubt largely responsible for the likes of Bruce Springsteen and Peter Gabriel becoming enamored enough by Chapman to invite her to co-headline their high profile Human Rights Now! concert tour later that year.

Chapman’s second album, Crossroads, released the following year, proved she was no mere flash-in-the pan and had much more to offer. The album continued to explore important social and political issue and her deeply emotive voice and ability to address important issues without becoming preachy continued to make her stand out.

So it was when Tracy Chapman, accompanied by percussionist Steve Thornton, took the stage at the fifth annual Bridge School Benefit. Following an introduction by Neil Young, Chapman begins her set with the title track from her second album, here stripped down to the essence of acoustic guitar and her soulful voice, which immediately captivates the Bridge School audience. Chapman’s debut album is represented next with her vivid portrayal of material obsession, “Mountains O’ Things,” embellished only by her acoustic guitar and Thornton’s sensitive triangle work adding a percussive element.

However, what is most intriguing about this set is Chapman unveiling three penetrating new songs that would surface the following year on her third album, Matters Of The Heart. Some perceived the album as suffering from too much instrumentation and studio sweetening, diluting the impact of Chapman’s lyrics, but that is certainly not the case here. Accompanied by only her acoustic guitar and the tasteful percussion embellishments of Thornton, Chapman’s lyrics are as potent as ever. Sneak previews of that album include “Short Supply,” “The Love That You Had,” and her expressive take on cultural fear and ignorance, “Bang, Bang, Bang,” which confronts the issue of guns, violence and hopelessness in the ghetto.

Chapman’s strong convictions, which are relayed in the lyrics to every song in this set, paint a vivid picture of the struggles that young people, particularly those of color, were experiencing at the time. Chapman’s set concludes with a powerful delivery of “Amazing Grace,” which she thoughtfully dedicates to the late Bill Graham.

Throughout this set, Chapman’s stunningly captivating voice is front and center. Whether her lyrics are hopeful or chilling (often both within a single song), this material has a depth and substance well beyond her years. Chapman’s socially conscious songwriting would have a significant impact on countless songwriters over the course of the decade, including Sarah McLachlan, Paula Cole, and Jewel. Chapman’s lyrical eloquence continues to shine a light on important issues, fueling her work to the present day and she has justifiably become one of the most resonating voices of her generation.