You are at:Home»News 2022»Tracy Chapman performing “Talkin’Bout A Revolution” at Late Night with Seth Meyers on November 3rd 2020
By Aurélie M. on 2 November 2020 News 2022, Videos

Tracy Chapman delivered her first TV performance in years with a rendition of “Talkin’ ‘Bout a Revolution” on Late Night With Seth Meyers Monday, November 2nd.

While Chapman rarely makes television appearances, she released a statement ahead of her Late Night performance, saying, “This is the most important election of our lifetime. It is imperative that everyone vote to restore our democracy.”

Seth Meyers added: “I’ve always thought Tracy Chapman’s music skips your ears and goes straight to your heart. I’m so honored and excited to have her on the show. She’s living proof you can be a great artist while also speaking out for what you believe in.”

The “Meyers” performance marked Chapman’s first major television performance since her spot on the final season of “The Late Show With David Letterman” in 2015. 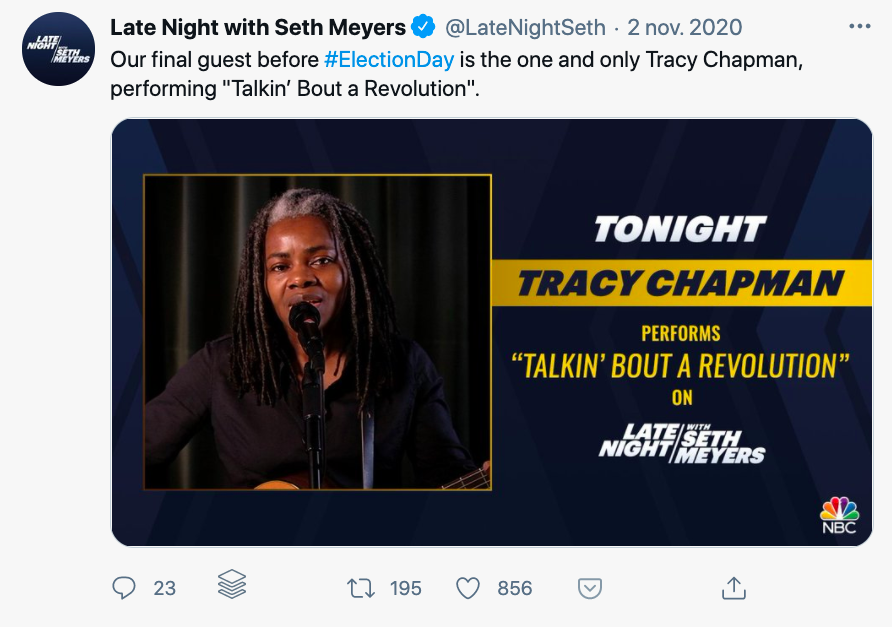