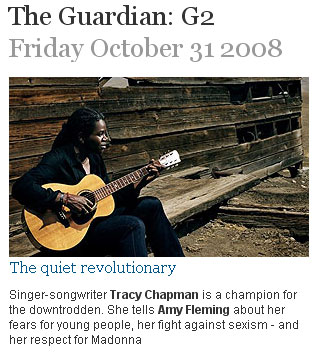 Since bursting on to the world stage in 1988, singer-songwriter Tracy Chapman has been a champion for the downtrodden. She tells Amy Fleming about her fears for young people, her fight against sexism – and her respect for Madonna.
It was during the height of the era of fast-buck capitalism, at a 1988 televised concert celebrating Nelson Mandela’s 70th birthday, that Tracy Chapman came out of nowhere and enthralled the world with her songs about social injustice. Just her, an acoustic guitar and a hushed Wembley Stadium. So meeting the protest singer in the exclusive surroundings of a five-star west London hotel suite feels more than a little incongruous.

She shuffles into the room, coddling her stinking cold with a chunky red scarf, and blinks out at the magnificent view of Hyde Park. She looks reassuringly unchanged – all long dreadlocks and slouchy clothes. There is still a mighty roll to her cheekbones, and the lurgy has done nothing to cloud her gentle, wise eyes.

Back in 1988, her eponymous first album, which included the singles Talkin’ ’bout a Revolution, Fast Car and Baby Can I Hold You, went on to be a No 1 hit on both sides of the Atlantic. Her follow-up, Crossroads, was also a UK No 1. Since then, Chapman has continued to record and tour. Next month, aged 44, she will release her eighth studio album, Our Bright Future.

Despite the optimistic-sounding title, Chapman has not come over all saccharine. According to the song from which the album takes its name, we’ve been “Led on led on/ to take the path/ where our bright future/ is in the past”.

“What does the future look like if the heads of society ask our young people to risk their lives for questionable causes?” she asks, matter-of-factly in her familiar woodwind voice. “I think it looks rather bleak.” After 20 years of being called upon to comment on global humanitarian issues, Chapman talks with cautious measure and studied compassion.

When she was 16 and living with her sister and single mother on welfare in Cleveland, Ohio, Chapman won a scholarship to a private boarding school in Connecticut. This, she says, was the pivotal moment in her life, and one of the reasons she is so highly politicised. “I have always felt immensely grateful for that opportunity. Then I received an academic scholarship to go to college [where she studied anthropology and African studies]. That wouldn’t have happened if there weren’t people who had given something to make that possible for me.”

Chapman had endured a terrible childhood. “The city had been forced to integrate the schools so they were bussing black children into white neighbourhoods, and white children into black neighbourhoods, and people were upset about it so there were race riots. A lot of kids spent more time out of school than in, but I always loved school and thought it was my way out of Cleveland, and out of poverty.” She has said that her bookishness led to her being bullied. As, indeed, did her race. She grew accustomed to racial abuse and assaults on her way home from school.

She started playing guitar aged 11 and was writing protest songs by her early teens. Her first album came out when she was 24. Although, she recalls, “My first record was almost not my first record.” After she signed the deal to make the album, the proposed producer was killed in a car accident and the record company called in someone far less experienced to take over. Chapman, four session musicians and the new producer were recording near Woodstock in New York state. “He put me in the middle of the room. They were all around me, everybody was playing wildly because he gave them very little direction … And the music was horrible. Bombastic.

“So I called the production company after a few days saying, ‘This doesn’t sound good.’ And they were like, ‘We think it’s all right, just stick it out.'” After a few more days, it still wasn’t working. “They insisted again that I continue so I just said, ‘I’m leaving.'”

Was she the only woman in this situation? “Yeah. It was like, you’re young, you’re inexperienced, you’re a woman even, what do you know about any of this?'”

The record company eventually relented, however and her early success meant that she has been treated with respect since then. But she says she has still occasionally faced “sexist attitudes” when taking an active role in the production of her records. “Say I would notice a problem with the tonality, people would say, ‘Oh, that’ll be fine,’ or ‘You’re not hearing what you think you’re hearing.'”

Is it harder for women in the industry in general? “Definitely,” she says. “I was trying to make a case for Madonna the other day, saying that she’s to be admired for her longevity in a genre that has mostly been for younger acts. Men are able to sustain a career into their 50s and 60s and still present themselves as sex symbols. With women on the other hand, people say, ‘Why doesn’t she retire?’ It’s just so unfair. So I have to give props to Madonna.”

Chapman is regularly associated with Amnesty International, the American Foundation for Aids Research, Free Tibet and the anti-war lobby, but one cause she doesn’t speak about much is feminism. Is she even a feminist? “Yeah, course. I think it just doesn’t come up because … people think we’re beyond it. There have been some gains made in terms of more equality for women in the workplace and in the way the legal system deals with issues of violence against women.” However, she says, “taking the recent campaign for the [Democratic presidential] nomination, if you look at the way Hillary Clinton was treated compared with Barack Obama, there seemed to be a double standard. People would make comments on what she was wearing all the time, saying that she was too emotional, even hysterical, and therefore unfit to be commander in chief. Yes, we still need to have a discussion and there needs to be improvement.”

Though an Obama supporter, she would have been happy with Clinton. “It’s strange how things come to pass,” she muses. “Hillary Clinton’s candidacy would not have been possible without Bill [Clinton]. And Sarah Palin’s spot on the Republican ticket would not be possible without Hillary Clinton. McCain saw how popular Hillary was.” How about Condoleezza Rice – a black woman who did it on her own? Chapman grimaces. “I don’t even want to mention her because her values are so contrary to mine. She’s definitely … It’s not fair to not consider her,” she concedes.

“The one good thing about Palin being on the ticket is that it continues to bring up discussion about women in politics. There’s a very curious thing I saw the other day which is that she belongs to some kind of evangelical Christian religious group that doesn’t allow female pastors, but her church is supporting her in her effort to be vice-president. And that same church also publicly states that women shouldn’t take a leadership role in their homes. And that they should be in willing submission to their husbands. How does she deal with this?”

The new record isn’t all politics. Rather it is a set of tenderly honed folk and country songs addressing themes of family and love, as well as war and religion. Then there’s I Did It All, in which the protagonist is a washed-up soak. Chapman channels the song’s lead character with vicarious glee. “I imagine her in a smoky club, and she’s stumbling around, trying to tell anyone who’ll listen about what she thinks of as her glorious past,” she giggles. “She walks around most of the day in some kind of negligee, with tattered hems. Her hair is done but it’s a little loose. Makeup, but slightly smudged lipstick.” Chapman clearly loves this game. Is she trying to show us a little-known side of herself? “No!” she exclaims, before adding: “Someone asked what I was arrested for, because they picked up on the ‘They read me the rights’ line [in the song], but I was not in jail!” Then she remembers to add, “There are good reasons for being in jail – for protesting”.