Things have calmed down for Tracy Chapman since she shot to fame – but she prefers it that way. Helen Brown meets her

The bitter scent of coffee sharpens the cosy musk of yellowed pages and damp leather jackets filling New York’s dimly-lit Used Book Café. A teenager in a “Free Tibet” T-shirt squeezes her overexcited mother’s hand as the pair nestle into the crook of a spiral staircase beside the makeshift stage on which announcements are being made about the charity Housingworks, which provides shelter and other services for those who are homeless and living with HIV and Aids. 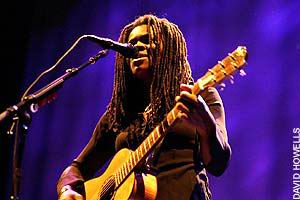 ‘Songwriting is magical and mystical’: Tracy Chapman on stage in New York

The scene is perfectly set for what I suspect will be an intense, worthy and acoustic fund-raising performance from Tracy Chapman. I sit cross-legged on the floor in preparation for socially-aware and soulful songs such as Fast Car, Talkin’ Bout a Revolution and Baby Can I Hold You. But she shakes us from our early-evening fug by rocking up to the mic with a joyous, dreadlock-swinging rendition of Hound Dog – a performance that owes far more to the big-jowled blues of Willie Mae Thornton’s original than Elvis’s whimpered version.

On her own songs, that distinctive voice trembles between warmth and defiance, her lyrical mood balanced between her passionate belief in the individual’s power to make the world a juster place and a wry acknowledgment that things don’t often work out that way.

Although the covers and the old hits delight the small crowd, it is the powerfully percussive protest of a new song, America (taken from her seventh studio album, Where You Live), that gets hips cranking and fans whooping.

Hard-eyed, she sings of foreign wars and exploitation, of how “The ghost of Columbus still haunts this world/Because you’re still conquering America”.

When we meet for tea the afternoon after the bookstore gig, it is obvious that while she claims to have relaxed a little around journalists, she still finds interviews unpleasant. She eyes me from behind her long straight locks like a cornered animal. I hold out my hand. Hers stays on her hip. “Tracy has a cold,” explains her manager, “she wouldn’t want you to catch it.”

She does look peaky in the artificial light. I am starting to sweat a little myself. Torturing a painfully shy person with questions is no fun, and the deadening atmosphere of the hotel room we have rented for the hour doesn’t ease things. The oxygen is thinned by crematorial levels of air freshener, and opposite the door stands a strange marble column with a metal urn on top.

At 40, Chapman’s face still has the cherubic glow we first saw in 1988 when the then-unknown singer-songwriter stepped on to the vast stage at Wembley for Nelson Mandela’s 70th birthday concert. Having appeared briefly lower down the bill, she was summoned back to take over Stevie Wonder’s slot after a technical hitch – and her brave conviction stole the show.

Fame was a sudden shock for the shy 24-year-old. Her eponymous debut went multi-platinum and won four Grammies, its strummable songs were instantly assimilated into the setlists of buskers the world over. And then things calmed down. A dedicated fanbase ensured that successive albums sold respectably, but she was happier out of the spotlight, making music in relative privacy. She doesn’t mind, she says, that some people think she’s been long retired.

“It’s fun playing small venues,” she says, gazing down at meshed fingers.
It must have felt great, too, raising all that money for Housingworks. “Sure,” she looks up, with a beautiful, broad smile, “I wanted to invite not-for-profit organisations linked to local communities to set up tables at the venues and let people know what they’re doing.”

On previous tours Chapman has encouraged voter registration, supported women’s shelters and left boxes in the lobby “where people could write anything they wanted. A lot of people would write about things that were happening in their community. And I’ve had some strange things. People saying that I must have read their mail: asking how is it that the stories I tell seem to match their lives so closely.”

Chapman’s work has always found the personal in the political. Her love songs play out as negotiations; her social issues have faces. She says that her lyrics are not autobiographical, yet she has recently spoken out about being assaulted by a gang of white boys on her way home from her Cleveland school when she was 13. “One of them called me nigger,” she has said. “That was par for the course, but on this day I confronted him with a few choice words of my own. He pulled out a gun and told me he’d shoot me. I was so mad, I stood my ground, and he started to smash my face against the ground.”

It is a scene she returns to in a new song, 3,000 Miles, singing of “bullies beating/soft skin against cold concrete”. But she discusses her songs as “works of fiction, so I don’t have to be responsible for what they say. There’s certainly emotion involved… but the path isn’t direct.”

She pauses for a very long time before expanding on her love of narrative. “As a child I spent a lot of time at the library.” She brightens up considerably discussing other people’s work. The first novel to knock her over was The Jungle by Upton Sinclair. “It was set in the meatpacking district of Chicago – I was moved by the challenges of working people.” The 1906 novel also launched a government investigation of the meatpacking plants of Chicago, and changed the food laws of America. So it taught Chapman that art could get things done?

“Yeah,” she agrees, “it tapped into safety issues.” Then, grinning, “It may have been after reading that book that I stopped eating hot dogs.”

The latest book to get Chapman thinking is Alice Weaver Flaherty’s The Midnight Disease. “As a writer I am interested in the process of creation,” she explains. “This book was by a neurologist who suffered from hypergraphia – a compulsive need to write. I think many people would say that writers like Stephen King have hypergraphia.” Do you? I ask. “No. No,” she half-sighs. “I’m not as prolific as I was.” At one point she wouldn’t commit anything to paper until a song was finished. She is nervous of pens, preferring pencils which leave “no evidence of your creative trail“.

She does like cameras. “When we started making Where You Live, I bought a bunch of Polaroid cameras in so that people could record the experience. Some of those pictures are in the CD sleeve.” Chapman, though, prefers the slow decision-making process of selecting a subject for her pictures with a pinhole camera. “It’s like writing a song. You’re choosing what to put in the frame and, with a pinhole camera, there’s an infinite depth of field. There’s a sense of influences and atmospheres seeping in and out. There’s something magical about them. And songwriting is magical and mystical.”

I ask if Chapman is religious. There are disquieting references to hiding from Jesus on the new album. “I don’t know – I’m not sure about anything as far as religion and spirituality go. These days in particular there isn’t a conversation that happens without that being an underlying issue. It plays a huge role in politics and even cultural life which comes partly from the administration we have now. I think religion played a huge part in Bush’s re-election.”

Six hours after our time is up, I see her stride on to another stage across town and surprise a huge crowd at the Hammerstein Ballroom with another unexpectedly raucous cover: this time of Nirvana’s Come As You Are. But again,

it is America that lifts the roof. The protest singer slaps warriorlike at the skins of the two large cylinders which stand either side of her. She wouldn’t do it in the interview. But now Tracy Chapman is standing tall, staring down the crowd and very definitely banging her own drum.

‘Where You Live (Atlantic) is out now. Tracy Chapman’s UK tour begins tomorrow at the Edinburgh Playhouse. Details: www.tracychapman.com